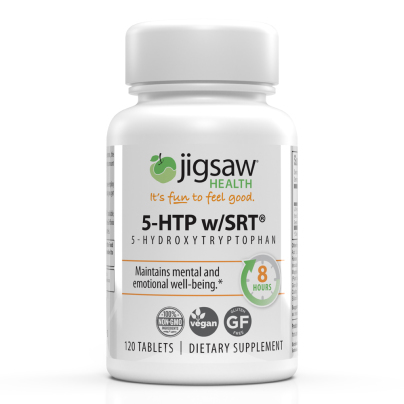 FINALLY, A 5-HTP THAT PROVIDES ALL OF THE BENEFITS — AND NONE OF THE DRAWBACKS!

Weve taken only the best form of 5-HTP (or 5HTP) that exists — sourced from a European manufacturer, Linnea, which has the purest form of 5-HTP available — and combined it with our proprietary, sustained release technology (SRT).

WHY IS SUSTAINED RELEASE TECHNOLOGY SO IMPORTANT?

First, 5-HTP has a very short half-life in the body — only about 90 minutes. That means that it is gone from the body very rapidly after being consumed. This is the reason that most people who take 5-HTP often need to take many doses throughout the day in order to maintain the effect.

The other problem with non-sustained release formulas is that when you dump a lot of 5-HTP into the GI tract all at once, it is rapidly converted to serotonin right there. What you really want though, is for the majority of 5-HTP to be converted to serotonin in the brain. So releasing it over a longer period of time allows the 5-HTP to be gradually absorbed and converted where it is most needed... in the brain.

Not only is this better for seeing a more long-lasting effect, but it can also help avoid stomach upset which some people experience as a side effect when 5-HTP is dumped into the intestinal tract all at once.

For most people, sustained release technology will also provide the ability to take a lower dose of 5-HTP, while still having the same — if not even greater — benefits.

Take 1-2 tablets daily, with or without food, or use as directed by your healthcare professional.