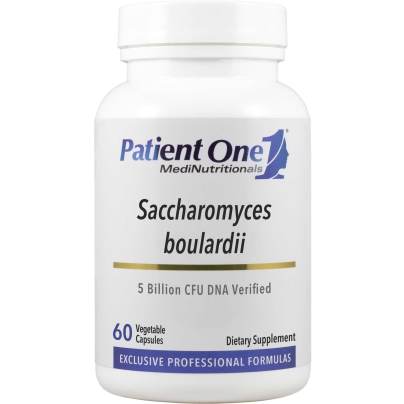 Save time and get this item shipped automatically as often as you need! Cancel or Update order at My Account.

Share this Item
Add to Wishlist Compare
XHealthcare providers only!

Saccharomyces boulardii is a non-pathogenic probiotic yeast that survives stomach acid to nourish the intestines, support the immune system and provide a favorable growth environment for the beneficial bacteria that support health and digestive comfort. Medical studies have shown the efficacy and safety of S. boulardii for a number of health conditions in both adults and children. These applications include prevention of antibiotic-related diarrhea, recurrent C. difficile-related diarrhea and colitis, travelers diarrhea, acute bacterial and viral diarrhea, inflammatory bowel disease and irritable bowel syndrome.

S. boulardii acts as a temporary flora that quickly achieves high concentrations in the GI tract. It is one of the few yeasts that survives best at human body temperatures and is able to colonize and persist in the gut.

Healthy gut flora protects against some infectious diarrheas. Antibiotic-associated diarrhea (AAD) is an example, as antibiotics deplete and disrupt the normal flora, and the resulting diarrhea may be due to changes in short chain fatty acid metabolism. A severe form of AAD is due to Clostridium difficule, a pathogen that can cause severe diarrhea and colitis. Recurrent C. difficile diarrhea is difficult to treat successfully as one recurrence makes further recurrences more probable, likely because antibiotics are needed to treat and thus the fecal flora remains imbalanced. Saccharomyces boulardii may be beneficial as an adjunct to antibiotics. Due to their fungal nature, the yeast cells of S. boulardii are antibiotic resistant.

Probiotic actions are strain specific and effectiveness of strains from the same species may be very different. S. boulardii is genetically and functionally distinct from brewers yeast (S. cerevisiae) and different from pathogenic Candida species. Even though taxonomically assigned to the S. cerevisiae species, S. boulardii is characterized by a number of genetic features providing them to be more suitable to the intestinal environment. Patient Ones S. boulardii strain is identified and verified through a combination of the most advanced genetic techniques.

Patient One Saccharomyces boulardii provides a minimum of 5 Billion viable organisms per capsule and is stable at room temperature, making it convenient for travel.

Take 2 capsules daily as a dietary supplement, in divided doses between meals, or as directed by a qualified health care professional. S. Boulardii should be taken at least 1 hour before and 2 hours after any antifungal agent. S. Boulardii can be taken along with anti-bacterial antibiotics. It is compatible with probiotic supplements. Store in a cool, dry place and avoid excessive heat and humidity. Shelf stable at room temperature. Refrigeration may enhance long-term stability.

This product is free of ingredients derived from genetically modified organisms (GMOs).